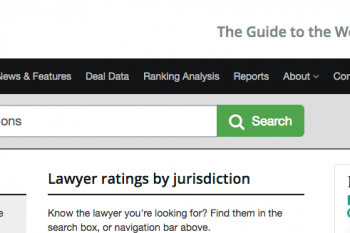 The next edition of legal directory IFLR1000 will feature considerably expanded coverage of the U.S. market, adding rankings and editorial in all 50 U.S. states and the District of Columbia.

IFLR1000 – Euromoney Institutional Investor’s flagship legal directory, which is now in its 27th year – is unique in that it focuses its research exclusively on the corporate and finance areas. This sets it apart from, for example, the Legal 500 and Chambersguides, which cover the full range of legal services (employment, real estate, life sciences etc.)

IFLR1000‘s expanded editorial will include rankings and editorial in four core practice areas: Banking, Capital Markets, M&A, and Restructuring & Insolvency. However, the depth of the market in each state will determine which areas appear in each state – it’s unlikely that all four practice areas will be covered in all 50 states.

IFLR1000‘s rankings are based on three criteria: quality and quantity of deals, peer feedback, and client feedback.

A few things firms should bear in mind when putting submissions together (this according to IFLR1000‘s press release on the expanded coverage):

Follow these links for more information on how to take part, as well as IFLR1000‘s practice area definitions.

My Take On This

I applaud Euromoney for taking steps to expand and improve its coverage of the world’s biggest legal market. I have felt for a while now that concerted efforts by both Legal 500 and Chambers to hone their research processes and engage fully with corporate counsel have meant those two organizations have pulled far ahead of the competition, in the U.S. and elsewhere. IFLR1000 is, in my view, playing catch-up.

The rankings/legal directory space is becoming more and more crowded, and firms are increasingly reluctant – not to mention unable – to submit to everything. At SavageNash Communications, we’ve come across many large firms who are significantly cutting back on the number of rankings publications they submit to, and instead are selecting a small handful of market leaders on which to focus their efforts.

This is the challenge IFLR1000 will face.

Strong, deep research and compelling editorial coverage are absolutely essential to success of any new directory in this already overcrowded market. I sincerely hope IFLR1000 has significantly expanded its editorial team to handle the large amount of extra research this new venture will require.

As ever, please feel free to get in touch if we can help.