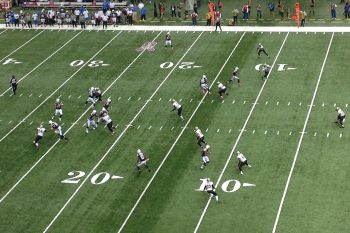 Anyone who’s spent enough time in my company will know I’ve spent a long time working in directories and even longer loving American football. There are more links between these things than you can possibly imagine.

So, in a sequence of tenuous segues and comparators, I mash up some powerful lessons for legal directories out of the magic of the NFL. If you feel the need to look away, do so now! Law firms can end up saying the same things as other law firms, much in the way that NFL teams copy what works and often run the same offense (US spelling for this as it seems wrong to use UK spelling in this context!). So be the Ravens, not the Lions. But be Juju, not Antonio.

Bonus points if you figured out who Philip Rivers thinks is wide open in the picture above.

Lesson 1) The Longest Yard. No, not the film. I mean Kevin Dyson catching a pass from the late, lamented Steve McNair (RIP) and straining every sinew to get the ball across the line on the final play of Super Bowl XXXIV but being held one yard short by the iron grip of Mike Jones. One of the best Super Bowls ever played. And simultaneously the worst, if you’re a Titans fan. It was also the last and only time the Titans made the Big Dance. But there’s always next year. Or this year!

Translation: Don’t let last year’s ranking disappointment, erm, disappoint you. Just like an NFL team with $177 million for player salaries this year, keep trucking for the next cycle. Persistence pays off because the directories want to see consistent performance over time. Learn from the errors of last year with honest self-analysis: what’s new? What’s different? What did the directories tell us? What didn’t the directories tell us? What does the writeup reveal? Modify the messages for this year to show what you do outstandingly well, not just an everyone-says-it list of what you can do. If your client referees didn’t respond, change the list for this year and communicate to them how quick and painless it is for them but how important it is to you. Promise them a year off from being a referee if they reply!

Lesson 2) Moving on. You might be Mike McCarthy but, now that you’ve moved on, you’re still Mike McCarthy and you still need a job. When you get a job, you still won’t have Aaron Rodgers; even worse, you’ve been replaced by a young offensive mind who was such an offensive genius that it took him nigh on half a season to work out THAT DERRICK HENRY IS A BEAST and you could, you know, hand him the ball once in a while and things might go better. Life isn’t fair, Mike McCarthy. When you’re Andy Reid, meanwhile, you have a big name and an emerging superstar. But you didn’t win a Super Bowl at your last place of employment (the one which won a Super Bowl without you just after you left) and now your current team just looked like world beaters until being ground into the dust just short of the aforementioned Big Dance. So, what does this season hold for you?

Translation: It’s common for big-name lawyers and teams of lawyers to expect the directories to transpose a prior ranking of the person or practice from one law firm to another. But it doesn’t always work out that way and the benefit of the move needs to be outlined and evidenced. Here are steps you can take to improve the chances that it does: (1) make sure the move is brought to the attention of the researcher prominently, and update the researcher if the move happens during the research period; (2) substantiate the person’s move by showcasing which clients or pieces of work have moved over to the new practice – the directories want to see that the lawyer/team is still in demand and clients following is a sure sign. If the move occurred in a tricky period – just before the submission deadline or after research ended – then update the researcher as you go along. A deadline that is in September, for example, might not finish research until 1-3 months later, so use that period to gather some new work highlights for the new arrival and provide them to the researcher during the research period. (3) Make sure to provide client referees to support the lawyer or team. Lastly, (4) be patient. If the move happened soon before research, then it might take a year for enough clients to move across for you to be able to make the convincing argument for the team or lawyer to be ranked higher. If, like Andy Reid, you have a rising star in your team (of counsel, senior associate, young partner), make sure to flag it up to the directories and substantiate their case for recognition. This is going to help the individual but it’s also going to help show the team’s depth of talent. Let’s assume you can’t put them on an NFL field for a critical no-look pass, so let’s just settle for evidencing the work they’ve been involved in and making sure some of the client referees can speak about them.

Lesson 3) The Stretch. Stretching is important. Keeps those hamstrings loose. Winning down the stretch is important, otherwise your 6-2 start turns into a 9-7 limp backwards into the Playoffs and a first-round loss. Jeff Fisher is Bill Belichick is a stretch. Tom Brady* is the most successful quarterback in NFL history. Blake Bortles is not. To take the decision to pay Blake Bortles vast sums in an effort to persuade yourselves and the public that he will lead the path to greatness would be a stretch. Oh. Wait. You did what?

Translation: Don’t pad the unpaddable. I’m talking arguments in favour of a law firm’s practice here, not shoulder pads. It is an unadorned truth that most good to excellent law firm practices in any area of the law could (and usually do) say in their directory submissions that they can do everything. The issue is that any researcher will be presented with anything from high dozens to 150 submissions saying much the same during one reporting period (across one jurisdiction or multiple practice areas), thus said similar messages from many sources blur into one. So, dial in on what the practice has done exceptionally well (a) traditionally and (b) recently and make those the focus. Aside from a brief acknowledgement of the practice’s comprehensive scope, focus opening arguments on the points of difference. When set against a field of a dozen or so law firms with similar scope and presenting high-calibre work, it’s the sophisticated, difficult, innovative and/or just downright biggest ever which make the difference. Placement of the most impactful (precedent-setting or first of a kind / largest) deals and cases high up the running order is a crucial part of that because researchers wade through thousands of examples of work. State the difference-making nature of the matter explicitly, rather than leaving it implicit on the assumption that it speaks for itself. Often, it doesn’t.

Lesson 4) Ringing the Bell. The NFL has come a long way in terms of health safeguards since the issue of concussion arose. Many other sports have now followed suit with concussion protocol tests for players suspected of being injured in this way. Helmets are more loose-fitting. Team-mates and opponents no longer “ring the bell”. Certain types of tackles and techniques have been outlawed from the game or become obsolete. The demise of the XFL rather proved that spear tackles are gone for good. After one of the biggest crises the game has endured, the NFL has been upfront about how it is working to make things better.

Translation: In the same forward-looking spirit, it is worth considering your law firm’s statistics and initiatives for diversity, inclusion and wellbeing. These are subjects which have come up regularly in questions over the past year or so as both Chambers and The Legal 500 begin to explore these issues more fully, and to champion mental health and wellbeing in the law. It’s pretty likely that in the foreseeably near future one or other of the major directories will request D&I and wellbeing information in its submission processes; some processes for certain awards and national directories already request it. If one major directory does so, the other is sure to follow suit. Your law firm might be hesitant to release such information, for fear of looking bad. But the law firms which accept they have work to do and show the improvements and efforts they are making will earn some measure of credit for doing so. I would expect a minority of law firms to provide such information in the first year it is requested, but then more to follow the next year as many law firms realise their situation is comparable with or better than some of their peer law firms. So, why not be forward-thinking to collate and voluntarily supply information on these statistics and initiatives in your next round of submissions before you’re requested to provide it? You can only affect the conversation by being in it.

Lesson 5) Trust the process. Do. Your. Job. You might not like the Pats, but you have to acknowledge (genuine) greatness when you see it. A dominant franchise and the sport’s best coach combined with its most successful quarterback* and a rolling cast of important contributors from great to small. Imitations abound. Famously working to the maxim: Do Your Job. Trusting the process – that if you do yours, your teammates will do theirs.

Translation: Directories season is a grind for each practice but it’s essential to do it right if you want results. Claims need to be substantiated and you must have fresh examples of relevant work and client referees to push the case for a practice or its lawyers. If one aspect of information or another is missing, little by little it diminishes the chances of the whole submission. Be clear and explicit about every positive, difference-making point. Advance the arguments you made last year to show progress since. If you show the researcher strong arguments and supporting evidence, then follow best practice guidelines on selecting client referees and encouraging them to reply, you can trust the directories process to achieve results for you with consistent participation.

To put my money where my mouth is, the first US law firm wanting help drafting or editing a Chambers or Legal 500 sports law submission will get that help for free. Unless they work for the Colts.

About the author: my name is Mike Nash and I’m one of three specialist directories consultants at SavageNash Legal Communications, all of whom are senior former directories editors and collectively have 40 years’ experience of legal directories; two of us worked in-house in marketing & communications at international law firms. If you’d like to know more about how we could help your law firm with your directories needs, then please look around our website, use it to contact us directly or contact me via LinkedIn.

About the article: This is a SavageNash website version of an identical article uploaded simultaneously on LinkedIn.